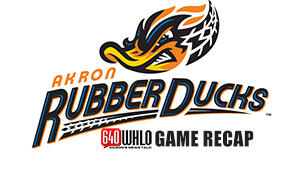 After starting to chip away in the fourth, Akron kept the momentum going in the fifth when Chris Roller started off the inning with a single. Victor Nova stepped up a batter later and doubled home Roller to bring the Ducks within one at 3-2. Erie retired the next two Akron batters before Bo Naylor ripped an RBI double to score Nova and tie the game. Naylor came around to score with a great jump from second base on a Micah Pries RBI single to put Akron in front 4-3 later in the inning.

Hunter Gaddis got the start for Akron and ran into trouble early allowing a solo home run in the first and two runs in the second. But after a leadoff walk in the third, Gaddis settled in and only allowed two baserunners the rest of the way. In total, Gaddis tossed five innings allowing three runs while striking out three. Tim Herrin followed with a stellar three scoreless innings of relief striking out seven. Nic Enright struck out two in a scoreless ninth to record the save.

The RubberDucks finally got on the scoreboard in the fourth when Pries doubled to center field, which allowed Naylor to score when the throw back into the infield was errant to make it 3-1 Erie. Akron added some insurance in the sixth when Jose Tena reached on a fielder’s choice, which brought home Ike Freeman to make it 5-3 Ducks.

Enright’s five saves tie him for second in the Eastern League…Pries extended his hitting streak to eight games, which is the longest by a Duck this season…Herrin extended his scoreless innings streak to five innings…Game Time: 2:15…Attendance: 4,799.

The RubberDucks will continue their series with the Erie SeaWolves on Saturday, May 14 at 7:05 p.m. Left-hander Logan Allen (2-1, 1.95 ERA) will start for the RubberDucks against Erie right-hander Reese Olson (1-2, 4.62 ERA). The game broadcast, powered by FirstEnergy, is on 640 WHLO. Tickets for all RubberDucks home games, are available at akronrubberducks.com/tickets.