RUSH: This is Carrie. Back to the phones, Salem, Oregon. Welcome to the program. Great to have you. Hi.

CALLER: Hey, thanks, Rush. Thanks for taking my call. I'm a longtime listener, and I'm praying for your recovery.

RUSH: Thank you very much.

CALLER: Hey, one thing quickly before I get to my point. I want people to know, there's a lot of support for Trump in Oregon, but because we are such a rural state, Portland overrides us. That's why we're blue. So he's got a lot of people that love him and are voting for him here. Just want people to know that.

RUSH: Okay, good. We're not gonna hold Portland against you. Don't worry about that. 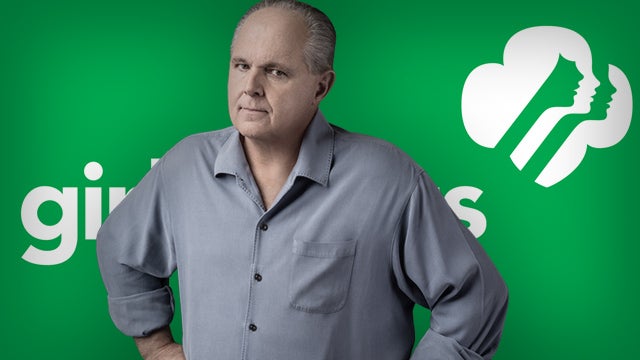 CALLER: Thank you. Okay. My point. Got up this morning, turned on Fox, first thing I saw was people attacking the Girl Scouts for congratulating Amy Coney Barrett.

RUSH: Right. I saw that.

CALLER: And also they had on their screen all of the women who have been and are on the Supreme Court. What the heck. I even heard that someone was threatening to start producing Thin Mints, which you know is what the Girl Scouts sell. I just want to hear what you have to say about that.

RUSH: About what? The Girl Scouts not being allowed to make Thin Mints anymore? I hadn't heard that.

CALLER: Yeah. There was somebody who actually threatened to start making those, and that's their main fundraiser. I mean, that's what they get supported by.

CALLER: Have you heard about this?

CALLER: About the whole thing that's happening. I want to know what your thoughts are. 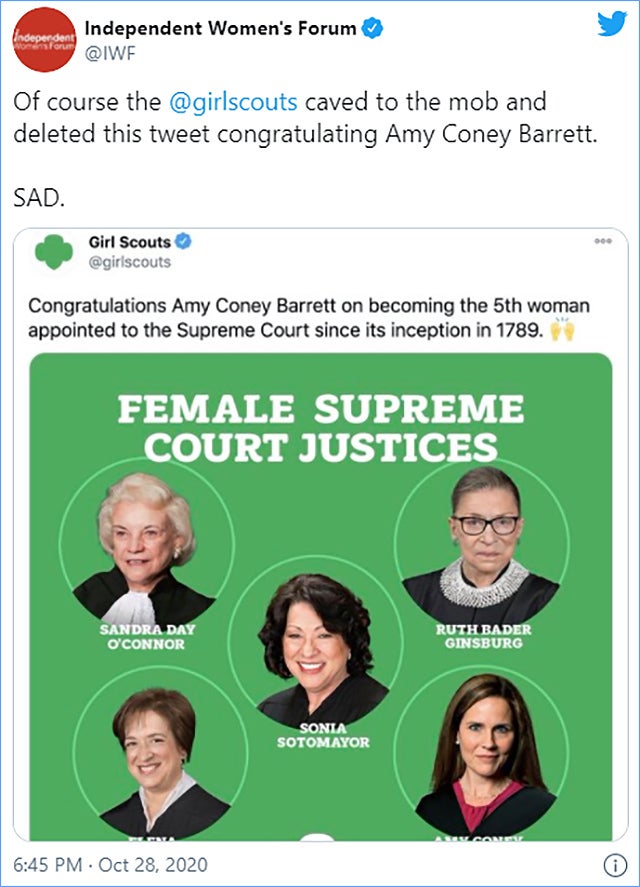 RUSH: Okay. Well, I think I've got the story here in the Stack. I do know that the Girl Scouts officially thanked or congratulated Amy Coney Barrett for making the Supreme Court, and they were dumped on. "Girl Scouts Deletes Tweet Congratulating -" here it is. "The Girl Scouts have been forced to delete a tweet that they posted congratulating Amy Coney Barrett on her appointment to the court because of the backlash on social media.

The Girl Scouts tweet out a congratulation to Amy Coney Barrett, and now they've gotta withdraw it. Why? Because some people we've never heard of bitch, whine, and moan about it on social media? Screw them. But that's not what we're doing. We're all kowtowing and we're all backing down. We don't want to be offensive and we don't want to offend them and so forth. We're trying to buy a little peace by letting them have what they want. You can't buy peace with these people because that's not what they want. 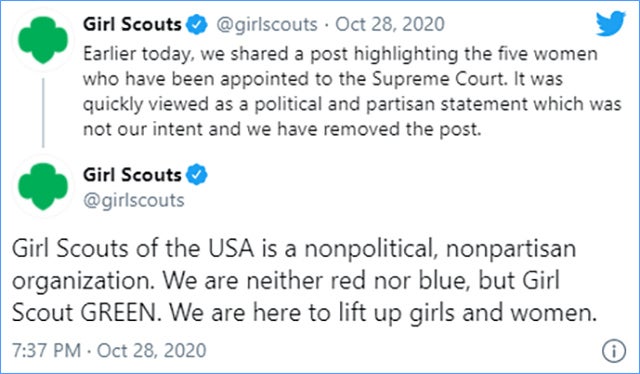 They watch it happen. They watch speech shut down on campus. They watch people violently attacked on campus for saying what they want to say, basically for saying conservative things or things that dovetail with American traditional values. They watch looting. They watch destruction. They watch rioters set fire to American cities. And we're about to elect the political party that supports that? I don't understand it. I haven't understood it for a long time. It's happening right in front of our eyes. It's not as though this is a gigantic, hidden bunch of activity that's taking place out there.

Everybody in the world can see it. To me, there ought to be a secret, gigantic backlash waiting to show up and vote and render these people the minority that they are. But I don't know that that's gonna happen. All I know is this. Back when I was growing up in my little hometown of 25 or 30,000 people, if this kind of stuff had started, it would have been shut down before it got anywhere near a threatening size.

Somewhere along the line, we started saying, "Well, I guess it won't hurt if they did it. Let's let it get out of their system." I think what was missing was that there was never a proper explanation to people why this stuff was happening, and to the extent that those of us who tried spoke up, we probably weren't believed. I mean, it's a tough sell to come along and say, "Folks, these people are trying to ruin our country. They're trying to destroy..." 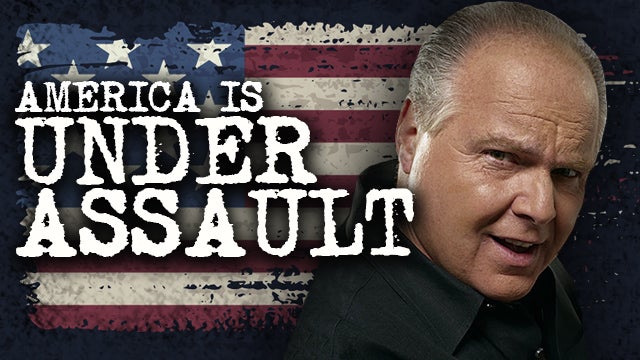 "Come on, Rush! Don't you think that's a bit of an extreme reaction?" "No! It's not extreme. If anything, I'm underselling what's happening here. If anything, I'm soft selling it. These people are out to destroy everything that has defined this country's uniqueness and greatness." "Why, Rush? Why would they want to?" "I don't know. They don't like it!

"They're communists. They're Marxists. They don't fit in. They're oddballs. They're weirdos. They're multiculturalists. They're ticked off about something. They're offended. I don't give a rat's a-- 'why.' Just because they're mad and offended doesn't mean they get to rule the roost," but, yes, it does. Yes, it has. The offended have gotten to do whatever they want to do. 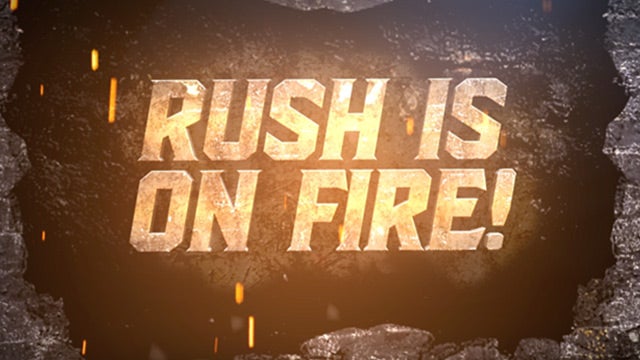 The Girl Scouts and the Boy Scouts, they've been destroyed, folks. They may as well not even exist in terms of what they used to be. They've been targeted because they are distinctly American values-based organizations, and they were attacked on the basis that they were homophobic, which was an absolute crock. So pardon me if my patience is a little short here.

RUSH: Ladies and gentlemen, the Girl Scouts are like the Boy Scouts. They're not what they used to be. They've been commandeered and taken over, and the Boy Scouts on the basis of because they were homophobic, and they wouldn't allow gay scoutmasters or whatever the garbage argument was. So the Boy Scouts kowtowed and caved, and whatever they were is gone.

It's the same thing with the Girl Scouts now.

The Girl Scouts are all about teaching little girls about abortion, feminism, climate change, global warming. They've been taken over just like the Boy Scouts were, and it's not just them. Every American institution that was distinctly and uniquely American has been targeted for destruction on the basis that it's racist, sexist, bigoted, homophobic, anti-LGBTQ or whatever the hell it was, and we just stood aside and let it happen. 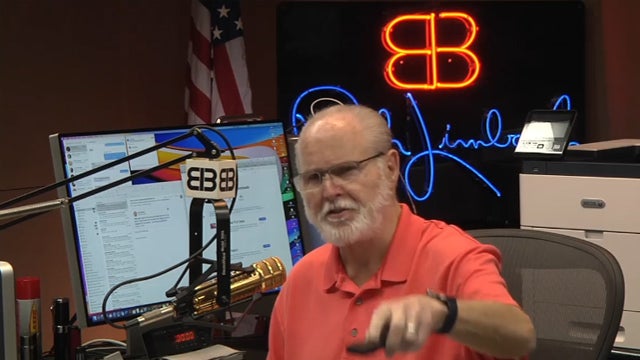 Sorry, that's why this election is so important. This election is an attempt to put the brakes on it again, like 2016 was, and you'll notice what happened after 2016. In 2016, they refused to accept the results, and they have been trying to make everybody's life miserable ever since. It's only because we got a guy, Donald Trump, willing to put up with the personal attacks and not cave into these people that we haven't lost it all as of now.

I, for the life of me, don't understand how the Democrats even have a holy prayer of winning this election. If this country... If we are still the United States of America -- and we still have a majority of people of distinct, unique American cultural values -- the left ought not have a prayer. But this is why I've been trying to make the point. Biden doesn't have a connection with anybody. Nobody could care less!

She puts the lie to every notion of it. There is no more angry, upset, deranged female in the country today than Hillary Clinton -- the most cheated-on woman in America -- and there's nothing about her that illustrates positively what the American left is about. This is what's been so distressing for so long to me personally.

If we still have a majority of people in this country who are distinctly, uniquely American in terms of the values that they live by and hold dear and cherish, the American left ought not have a prayer of winning the election. But look, I'm not naive. I know the election's not about that. The election is about Donald Trump's personality.

Then you've got the entirety of the U.S. media, which has abandoned journalism and is now totally devoted to left-wing Democrat Party activism. But they do it under the guise of "journalism" so that most people apparently think what they're watching is journalism rather than left-wing activism when they watch "the news."

There is so much deceit -- such an intricate web of deceit -- that has been woven for the past number of years in this country. People are... I guess you almost have to forgive 'em for getting caught up in it, because it's been oppressive. It's been everywhere. It's been never ending.