RUSH: This is a sad, sad story. Arctic tour ship, 16 climate change warriors on board got stuck in ice. How often does this happen to these people? They go down to South America looking for evidence of global warming, climate change, they get stuck in ice and a fossil-fuel-driven icebreaker has to go rescue them.

"Maritime.net reports that an Arctic tour ship carrying a Climate Change documentary film team and several tourists, ran into some ice last week. They had been shooting a documentary about climate change and melting Arctic ice." I'm not kidding you.

“The MS MALMO, a Swedish-flagged ship, was cruising off Longyearbyen, Svalbard Archipelago, halfway between Norway and the North Pole when it got stuck in ice. The vessel’s sixteen passengers had to be airlifted to safety under ‘challenging’ conditions,” using fossil fuel aircraft. “According to Maritime.net, seven crew members remained aboard the ship as they awaited assistance from the Coast Guard,” also powered by fossil fuel ships. 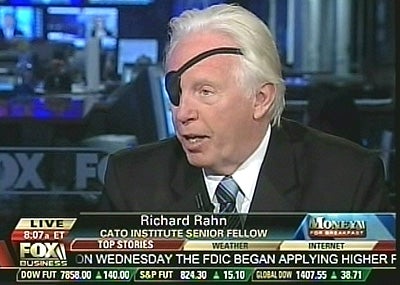 Does the name Richard Rahn ring a bell? R-a-h-n. Oh, come on. It does. He's a guy that used to be on C-SPAN. Well, CNN back, in the eighties. Eye patch. Mr. Peggy Noonan. He was married to Peggy Noonan for a while. He has a piece at the Washington Times. “Untouched by Climate Change Reality -- For years global Cassandras have predicted that doomsday is at hand.” It is a great place. I'm gonna have to give you some pull quotes from it.

RUSH: Okay. Let me give you just a couple of pull quotes from the piece here by Pete Rahn because, folks, this is so right on the money. This is adult in the room kind of stuff. So here we are up against climate change, a bunch of people scared to death of fossil fuels which have improved the quality of life, the length of life, life span, the standard of living. They have enabled us to even better clean up the messes that we make, the environmental messes.

Fossil fuels revolutionized the human experience on earth in every which way you can imagine. Now they are painted as evil, destructive, the end of habitability of the planet. It's absurd. It's ridiculous. It's embarrassingly dumb.

Ironically, the CAFE standards were hysterically passed to decrease our reliance on the Middle East for oil, but they're now basically meaningless since we are energy independent from any foreign nation, thanks to fracking. Yet we still have mileage mandates that require cars to be built that kill people even in minor accidents. All of this needs to be revisited to just adjust to the new reality.

A pull quote. “The U.S. political and media class have managed to turn people who are heroes into villains. For years, the fact that the United States was dependent on less than savory foreign countries was viewed as costly and dangerous for the national well-being.

“The problem was solved by oil-men, many with advanced degrees in geology and physics who developed fracking, horizontal drilling and other techniques for producing much more oil and gas at much lower prices, and with lower emissions. Thank goodness for realistic private businessmen rather than government/socialist talking heads who would have left the world dependent on whale oil.”

Another pull quote. “For decades, the global Cassandras have been telling us we have only a limited number of years or it ‘will be too late.’ In 1989, the claim was that doomsday was 11 years away. The year 2000 came and went without the ‘required actions,’ and nothing changed.

“This past week, CNN held a seven-hour forum where the various Democratic candidates for president presented their solutions for the ‘climate crisis.’ Each one had a different cost estimate for their solution, as well as a different number of years before the world comes to the end — again, as you recall it did in 2000. Both the cost numbers and the years to the ‘end’ seem to have been untouched by reality.”

Untouched by climate change reality. Nothing they have predicted has come close to coming true, but what I like about this, the CAFE standards story is absolutely true. They're mandating people drive around in death traps, cheap little plastic aluminum things. But the people who invented fracking, who created the methods to cheaply and economically get oil are indeed heroes. They are not the villains. They're not destroying the planet. We are ass backwards on the way we look at this.